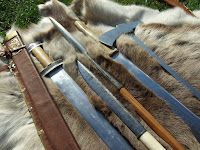 Despite the high regard given by the Anglo-Saxon folk to the sword, there are precious few original Old English terms to describe its component parts.... 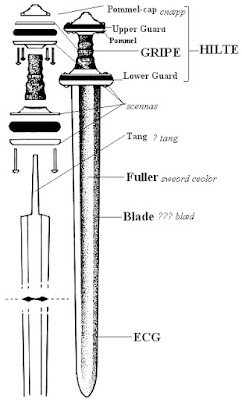 The sword basically comprises the blade and the hilt; defined as everything above the blade. Most Anglo-Saxon sword-blades had a fuller down the centre to lighten it and a sharp steel edge.
The word sword derives directly from the Mercian sword (West Saxon sweord) In turn this comes from the Proto-Germanic swerdan which derives from the  Proto-Indo-European swer- : to cut.

Similarly, the word tang seems seductively archaic but was not recorded in its current meaning until the 17th Century. The Old Norse does have tangi, which does have the meaning ‘sharp extension of a metal blade’. The term is related to our word tongue. In modern German, the term for the tang is angel, which is cognate with Old English enge - narrow and anga - sting / goad. The Old English term ‘tang’ is glossed as ‘tongs’ in Clarke-Hall’s Anglo-Saxon Dictionary. As the word ‘anga’ is needed for the heavy javelin, the Angon, perhaps the term ‘tang’ should be accepted even if its linguistic provenance is questionable.

The term ‘edge’ is, however, unquestionable. It is found in Beowulf; typically in line 1459 :

"the edge was iron, marked with venom-stripes"

Poetically ecg can act as a kenning* for the sword itself.

The term ‘fuller’ used to denote the groove swaged into the blade to spread the metal and lighten it is quite mysterious. It derives from the Latin fullo - someone who fulls cloth - however, the relationship between treading cloth in a bath of stale urine and swaging a sword seems tenuous to put it mildly. The three Old English words for fuller all seem to relate to cloth (spurnere, fulwa and wealcere). The modern German term for the sword fuller is ‘hohlkehle’ meaning hollow groove. This is cognate with the Old English Hol and Ceoler, the latter of which can mean channel. It is thus tempting to call the fuller the blodceolor but this would be to perpetuate the popular myth that the fuller is meant to channel blood and must be regretfully declined. This is despite the recent tentative identification of the Old Norse word blódrefill (blood-tapestry?) as the fuller. Perhaps ‘Sweord ceoler’ is an acceptable term.

The known Old English words for what is now known as ‘pattern-welding’ are fascinating. Of course, the term Pattern-welding is a modern one, invented by Herbert Maryon as late as 1947. It is certainly superior to the preceding term ‘Damascened’, which is still used particularly in Europe, but which properly relates to the fine patternation of Wootz steel. Most terms are kennings * and open to some poetic interpretation. The intricate regularly repeating patterns often resembled the marking of a snake’s back, so the Englisc often called them Wyrmfah. Another term; Atertanum fah is often mis-translated as ‘annealed with venom’ but really means ‘with poison-twigs / stripes’, where ‘poison-twig’ is itself a kenning for a serpent and thus suggests the markings of an adder. Brodenmæl means something like ‘sprouting pattern’, while hringmæl means ring-like patterns. 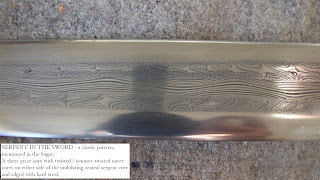 Wægsweord clearly indicates a wave-like pattern. Sceadenmæl means either ‘shaded pattern’ - a nice description of the subtleties of the patternation, or refers to the scales of a fish, the shad. The terms grægmæl and scirmæled  are self-explanatory meaning grey-coloured patterning and shining patterning respectively.Wundenmæl, meaning ‘twisted pattern’ may well be the generic term for what is better termed ‘twist welding’.
(*Kenning - an Old Norse term for a poetic paraphrase, found both in Old Norse and Old English alliterative poetry)

The word hilt is itself Old English and simply means ‘handle’ (from Proto Germanic helt). Interestingly, it can also be used in the plural.
The O.E. term wreoþenhilt probably refers to a sculpted spiral grip designed to enhance purchase.
The sword-grip also finds its origin in Old English; from Proto-Germanic grippan - to seize, hold.

Below the grip is what is now termed the ‘lower guard’ or ‘cross-guard’. The function of the lower guard is to protect the wielder’s hand from other blades sliding down onto the hand and wrist during combat. With the upper guard it also served to lock the fist into place while gripping the weapon. There seems to be no specific word for this structure in Anglo-Saxon times other than  ‘the hilt’. Early English swords had their cross-guards constructed mostly of organic material; wood or horn being typical. A flattened oval, it was sandwiched between two thin metal plates, sometimes of gold, and riveted together.
In Beowulf there is this description :
Line 1694

‘Likewise, on the sword-guards of bright gold it was rightly inscribed
with runes, set down and told, for whom the sword was first made, the
best of swords, with twisted grip and serpent-patterned blade.’

Scennum is the dative plural of scenn. This is cognate with Old Norse skán, meaning crust and the Modern English word ‘skin’. Opinions vary but the term could well relate to these gold plates.
Similarly, the upper guard has no specific name. Like the lower guard it was, in early swords, a metal/organic/metal sandwich through which the upper tang protruded. This was then peened over to secure the whole hilt. This was then hidden by what is now called a pommel-cap or as Davidson succinctly called it, a knob, which was riveted onto the upper guard.

In the later early medieval sword, the upper guard would be replaced by a rounded iron ball or disc which, in the 14th Century, acquired the name ‘pommel’ (from the late Latin diminutive of the word for apple).
No dictionary gives much help here but the less linguistically unstable German and Old Norse / Icelandic languages do. The modern German word for a sword pommel is schwertknauf / knauf (or knopf - from which the word knob is derived). Knauf means stud, knob, boss or button. The Old Norse term for the pommel was Knappr, also meaning knob, stud or button. The Old English. word cognate with these is cnæpp which, although glossed as ‘summit of a hill’ can also mean knob or button. The lost Anglo-Saxon term for the pommel / pommel cap can thus be confidently predicted to have been the cnæpp.

Some early Anglo-Saxon swords had rings attached to the upper guard. The function of these rings is unknown but the A.S. term would have been either hring or beag. 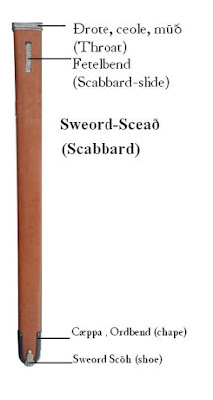 A sword is of much less value without its scabbard and sword-belt, so the nomenclature of the sword furniture also should be examined.
Firstly it should be noted that the word scabbard is of Norman French origin, deriving from escauberc meaning ‘blade protector’. Naturally the term is anathema to Anglo-Saxonists. The common Anglo-Saxon word for the scabbard would have been sweord-sceað (literally ‘Sword-sheath’). This derives from Proto-Germanic skaithiz and is cognate with the Old Norse sverð-skálpr and the German scheide. The word probably has its origin from the Proto-Indo-European base skaith - separate, based on the idea of two laths of wood swathed in leather making up a simple scabbard.
There is also an obscure Anglo-Saxon word lecg which might mean sheath or scabbard.

The fragile sword-sheath  often had metal fittings to reinforce it.
The metal fitting at the top of the scabbard where the blade enters is called the throat, top-mount, locket or mount. Although there is no literary evidence, Ðrote would seem the most likely term. Ceole (q.v.) or müð would be acceptable alternatives (-the German term for the a scabbard-throat is mundbleche - meaning ‘mouth-plate’.)

At the bottom of the scabbard the blade point is protected by a metal fitting called the chape. The modern term derives from the Latin cappa via Norman French and, not unreasonably, means cap. The Old English word is thus likely to have been cæppa but again there is no literary evidence. The German term for the chape is very logical : ortband, meaning ‘point tie’. The Old English equivalent would be ordbend.

The scabbard was often further protected from wear by an extension called a drag or shoe. The Old Norse term for a chape was sverð-skór - sword-shoe, so it is logical to conclude that the Englisc name would have been sweord scöh.

Some scabbards had a fitting into which the sword-belt slotted. This is now termed a scabbard-slide. The modern German term interestingly is schwertriemenbügel - rather a mouthful! It means sword-belt clip/bracket/hanger/thing. If this is translated into Old English the term sweordfetelbyge is produced. Perhaps the simple ‘fetelbend’ is preferable.

This introduces the issue of what to call the sword-belt. This would usually have been a baldric, worn over the right shoulder, rather than a waist-belt. The words belt and baldric both eventually derive from the Proto-Germanic baltjaz, probably from an early borrowing from the Latin balteus. The word commonly used for the sword-belt is, however, sweordfetels (- as distinct from fætels, although sometimes spelled fætels just to confuse things !) This is cognate with the O.N. sverð-fetill and O.H.G. fezzil and ultimately derives from Proto-Germanic fatiloz and Proto-Indo-European fat - to hold. 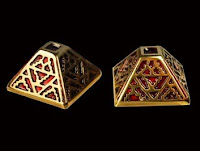 In the 7-8th Century there appears to have been a fashion for securing the sword (probably more symbolically than practically) by means of two straps. These were similar to the so-called Norse frið-bonds. The ends of these straps were decorated with what are now termed ‘sword pyramids’, little hollow pyramid-shaped objects, usually of copper alloy but sometimes of gold decorated with inlaid garnets of ‘miraculous workmanship’. Each has a slider-bar at the base so that a strap can be fed through and secured. Again Old.English literature gives no clue as to what our ancestors called these. The most tempting term would be gærsum - which means jewel or precious object (cognate with O.N. görsemi). I like this for its similarity to gæred meaning wedge-shaped, related to gar - a spear. An alternative would be Gimm (from the Latin gemma.)

The similar hemispherical buttons, now termed scabbard bosses, which helped stabilise the scabbard suspension are also without an Englisc name. Here, however, it can be predicted with some confidence, that they were called cnæppas (cognate with O.N. kneppa). The word Cnæpp, while meaning ‘the summit of a hill’ can also denote a ‘fibula’ or button and this is its Old Norse meaning.

Some of the above identifications must remain speculative but the challenge of finding the true Old English names of these beautiful objects must be worthwhile to Anglo-Saxon scholars and avoids using the language of the invader !
Posted by Dr Andrew Thompson on Friday, November 11, 2011