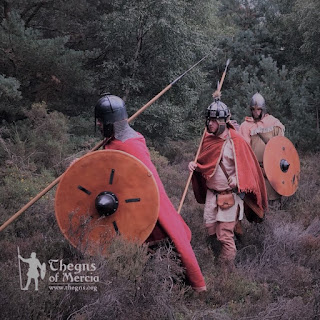 After many years of keeping this blog going in the background, with changes to blogger and this place looking a little tired, we've decided to relocate to a new blog within our main website.
Future articles discussing history, archaeology and culture of the "Anglo-Saxon" and "Viking" Ages will be available at www.thegns.org/blog alongside some 'remastered' versions of some of our more recent posts here.

There are FIVE Anglo-Saxon Helmets


Few archaeological finds are as evocative as helmets - many items of war-gear can help paint a picture of ancient battlefields, but in framing (or in some cases directly representing) the face, helmets help to humanise warriors from centuries past. This is particularly ironic given that, at least in some cases, helmets in antiquity were designed to create an intimidating sense of “otherness”, occupying the “uncanny valley” between metalwork and man. It is in our nature to recognise and emotionally respond to faces, and it is hard to stare into the eyes of the Sutton Hoo helmet and not feel as though you have, in some sense, met a person, rather than simply viewed an archaeological artefact. No surprise then, that over and above all the other treasures in that unprecedented burial panoply (including some with considerably higher bullion value) it is the helmet from Sutton Hoo that has become emblematic of the assemblage, and the most enduring symbol both of Anglo-Saxon material culture, and even of British history itself.

The Anglo-Saxon period in Britain spanned six centuries, and although it is unfairly reductive to characterise it purely as a time of war, it is undoubtedly true that regular clashes between well-equipped armies peppered the period and dictated the convoluted path taken from locally identifying post-Roman communities to a coherent united England. The scale of Anglo-Saxon armies continues to be debated, and it is not entirely clear how well equipped they were, but archaeological discoveries in recent decades have provided abundant examples of war-gear – especially weapons – to inform our image of Anglo-Saxon warriors. Such gear is most abundant from the early period (5-7th centuries) thanks to grave goods from the ultimately doomed furnished-burial rite, but even from these centuries, that most evocative item of war-gear, the helmet, is exquisitely rare. We just don’t have many examples. There’s a bigger problem though; we don’t even know how many examples we have. Almost all running totals are wrong.