These viral posts, with less and less backstory with every share and retweet, are wilfully sensationalist and misleading.

The skeleton - of a 6th century Anglo-Saxon adult female with grave goods - was discovered during excavation of an Early Anglo-Saxon cemetery in Oakington, Cambridgeshire, by archaeologists of Manchester Metropolitan, and Central Lancashire universities, in 2014. Their dig, which spanned multiple seasons from 2012-14, featured in Series 3 episode 1 of “Digging for Britain”.

Presence of an early Anglo-Saxon cemetery had been known since 1938, and excavations in 1993 uncovered a further 25 burials, together with settlement evidence, within recreational ground along one of the village’s minor roads. However, the full extent of the cemetery had, for most of the last century, not been known, and residents of the village, businesses, and utility companies got on with their lives.

The particular burial in question (grave 116- nicknamed “Piper”) uncovered during the 2014 excavation, was very close to the modern road, which modern underground infrastructure supplying the village follows. The skeleton was found with a small-long brooch on each shoulder, and an expensive large cruciform brooch face down, indicating she had been buried in a peplos dress and centrally pinned cloak. She also had wrist-clasps representing a sleeved dress beneath the peplos, and had swags of glass and amber beads. 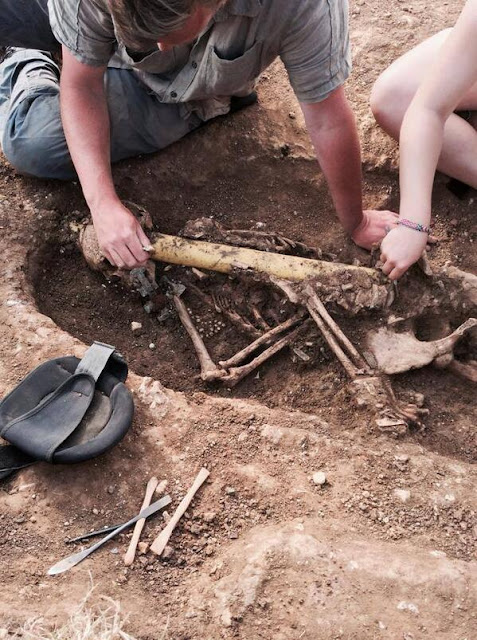 The now infamous yellow pipe, we understand to likely be a gas line, which had been installed by the standard practice of directional drilling. This involves machinery tunnelling a long route for pipes, between small access trenches, minimising the disruption that would be associated with the more obvious and low-tech “cut and fill” method for laying pipes. Although geophysical sensing methods are used to scout for anomalies, hazards, or archaeological remains ahead of the drilling, these cannot reliably detect human bone, and it is overwhelmingly likely that the installer of the pipe was entirely unaware they had punched through a 1500-year-old burial.

The archaeologists noted during the 13-hour excavation how impressively the boring of the pipe had punched through cleanly, with minimal disruption to the burial, and missing the grave-goods by a matter of centimetres.

Respectful treatment of human remains is certainly desirable, and an increasingly important priority for archaeologists conducting excavations. No archaeologist or engineer would want to see an ancient burial skewered in this way. What happened to “Piper” was obviously unfortunate, but was almost certainly an unavoidable accident, and not a wanton act of ignorance and desecration.