A counter-sunk base typically housed an additional escutcheon, often even more elaborate, on the base, and created an inner platform for another escutcheon inside, or in some cases 3D sculptures (such as a fish, raised up inside the bowl as if swimming, in the case of a bowl from Sutton Hoo).

Hanging bowls were expensively made objects fromO the richest burials yet their precise origin and meaning remains a mystery. Their decoration is quite distinct from Anglo-Saxon techniques, and commonly regarded as “Celtic” - perhaps they were diplomatic gifts or evidence of trade with post-Romano-British communities either outside of Anglo-Saxon territory, or perhaps from coexisting British enclaves. Although later related bowls exist from Ireland and Scandinavia, each of different designs, no major concentration of bowls or similar escutcheons (representing a source) has ever been found outside of England.

Their purpose remains a complete mystery. They could not have survived heating over fire, and no residues of any contents have ever been identified. The array of decoration suggests the bowls were intended to be seen from below, from the side, and looked into; the latter also implies they were supposed to contain clear liquid - probably water. Though it’s been speculated these could be associated with baptism, that would fit uncomfortably with their occurrence in overtly pagan burials. Other suggestions include use as lamp-reflectors, or for aspersion. However, in burials where grave goods fall into two categories - war-gear and hall-gear, representing the dual role of Anglo-Saxon chiefs as war-leaders and party-hosts, hanging bowls sit more comfortably in the latter category. 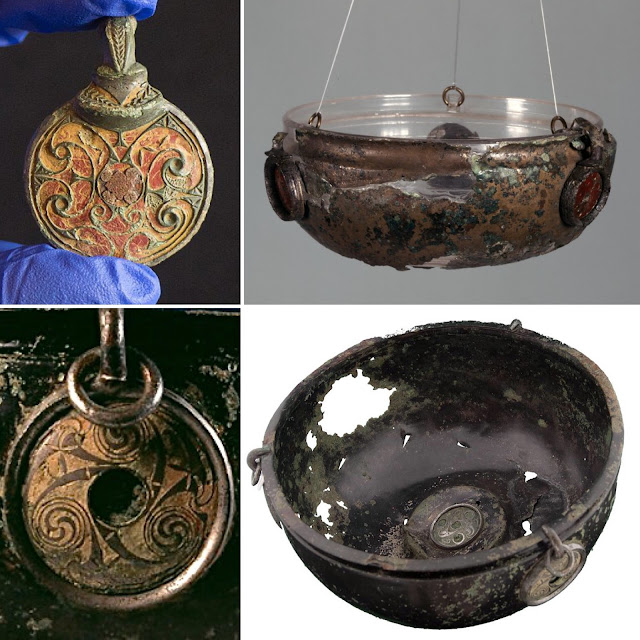 We know little, directly, of pre-Christian Anglo-Saxon customs or ritual practice. The Old Norse Hávamál - verse proverbs attributed to Odin, preserved in the 13th century Codex Regius, but which may date back, at least in part, to the 8th century, describe the customs of manners and hospitality in a Viking hall; that guests should be greeted with “water, towels, and welcoming speech”.  In the filthy early medieval world it’s likely such a custom would be shared by related cultures, and that guests would be offered a bowl of water for washing, upon entering the hall or before eating. Given the work required (probably by slaves or servants) to refresh and maintain availability of clean water inside the hall, without plumbing, this gesture would be another opportunity to flex one’s wealth and status.

Anglo-Saxon hanging bowls, with their countersunk bases, resemble gothic rose-water dishes used for hand-washing at feasts; the earliest surviving example dates to the reign of Henry VIII, and now belonging to Corpus Christi College Cambridge, is known to have been used at Queen Elizabeth I’s 40th birthday party.

We have experienced directly how filthy Anglo-Saxon halls could be, even despite endless cleaning. Ash from the central hearth would constantly settle on and contaminate every surface, including a basin of water. A hanging bowl could be hoisted high into the eaves away from most of the ash, and then carefully lowered when required. It’s tempting to imagine these spectacularly crafted objects being admired from all sides as they slowly descended from the roof for the hand-washing ceremony.

So, it seems likely that these bowls represent an ancient tradition to provide water for visitors to wash their hands as they entered the hall. Perhaps it’s a tradition we should bring back?

Bruce-Mitford, R.L.S. and Raven, S., 2005. A Corpus of Late Celtic Hanging-bowls with an Account of the Bowls Found in Scandinavia. Oxford University Press, USA.