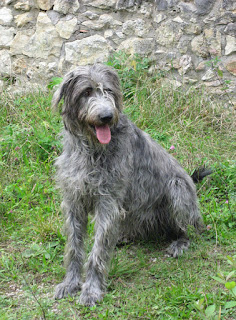 The dog (Canis lupus familiaris) has been the premier companion-species to man for many millennia. The wolf (Canis lupus) would seem to have been tamed roughly 15,000 years ago. Dogs act as guard-animals, aid in hunting and act as companions.
Dogs were much valued in early English and Scandinavian society...


Of course, the Island of Britain had long been famous for its hunting-dogs (Strabo) which were noted amongst its most valuable exports.

Good hounds were valued both as working animals and as companions and were often given as gifts by the æþeling-class. Ælfred the Great is recorded as having gifted a pair of fine hounds to the archbishop of Reims.
The value of such dogs could be considerable. This is demonstrated in the Laws of Hywel Dda (Hywel the Good) who was king of Deheubarth in S.W.Wales in the 10th century and friend of King Aþelstan. Here it is recorded that :

The king’s greyhound, if trained is worth 120d and his lapdog 240d. Conversely, a free-holder’s deer-hound or lap-dog is valued at 120d. A ‘foreigner's’ lap dog is, however, valued at only 4d; the same value put on a ‘common house dog’. Furthermore it is noted that ‘whatever dog a stranger may possess, its value shall be the same as that of a ‘dung-hill dog’, i.e. 4 pence. It is my impression that these values are the doggie equivalent of wergilds for human beings, rather than actual values. For comparison in 9th century Mercian law a regular freeman (ceorl) was in fact worth 1,000d, an æþeling was worth 6,000d. Interestingly, the wergild for a Welshman (wealh) was around 500d. An Anglo-Saxon silver penny would have approximated to between £10-30, so making the ‘hundgild’ for the king’s prize hunting-dog to be at least £2,500 in modern terms. The remains of dogs are often found in Anglo-Saxon sites. All too often, however, it appears that the dead dog was consigned to the midden, which brings Hywel the Good’s term ‘dung-hill dog’ to mind. Whole canine skeletons are often recovered from these rubbish pits. Excavations at Thetford, for example, produced a good haul of bones and skulls. These would have been large dogs, the size of a modern retriever, with skulls of the hound type with relatively long muzzles. Most would have been sheep-dogs, while the larger ones would have been deer-hounds.

Dog skeletons are not uncommon in pagan Anglo-Saxon graves and these must reflect a beloved pet accompanying his master or mistress to the next world. Similarly, Viking graves often contain one or more dogs. The Tjängvide image stone clearly shows the arrival of a dead warrior into Valhöll. He is met by a Valkyrie, bearing a mead-horn, but behind her waits the warrior's faithful hound. Like many modern English-folk, heaven would not be complete without dogs.

The Eddas record that the dog Garmr guarded the entrance to the underworld, as depicted on the Tjängvide image stone. Perhaps, on the journey to Valhöll having a dog with him helped a ghost pass through the portal.

Dogs were found in large numbers in the Vendel Age graves in Sweden. By the Viking Age, fewer dogs are found in each grave. The Oseberg ship burial contained four dog-skeletons despatched to accompany their mistress. The Gokstad ship contained six dogs interred with their master.


The Ladby ship-burial on Funen/Fyn, Denmark contained the skeletons of four dogs and, most tellingly, a gilded bronze dog lead decorated in Jelling Style. The custom of sending a person’s dogs with them to the afterlife must have been common.

The general Old English word for a dog was hund (and equivalent Old Norse hundr). This comes from the Proto Germanic *hundas, which derives from the Proto-Indo-European *kwon- "dog". The meaning narrowed in the 12th century to mean a "dog used for hunting."

The origin of the word "dog", however, remains shrouded in mystery. Certainly there exists the late, rare Anglo-Saxon word docga but why it displaced the native ‘hund’ remains uncertain. Certainly by the 16th century dogge was the common word for a canine. the Old English docga appears to derive from *docce, meaning ‘muscle’, which is found in the compound-word fingerdocce, plus the suffix -ga (as also found in frocga (frog) and picga (pig). *Docce derives from Proto-Germanic *dukkón - power, strength, muscle, itself deriving from the Proto-Indo-European root *DU, meaning work, toil.

The Anglo-Saxon word for dog-collar is hoppe. The term for a female dog; bitch, in Old English is bicce.
The term ‘puppy’ for a young dog derives from the Latin pupa. The Anglo-Saxon term would have been hwelp (whelp).

There are numerous dog-related Old Norse words, including bikkja for bitch. This is related to the English term of abuse and also used in this way by Vikings, as was the related term bikkju-sonr "son of a bitch".

Other Old Norse dog words include;

The dog (Canis lupus familiaris) has been the premier ... iskeletondog.blogspot.com

Roman's were so impressed by the native people's of Britain's dogs and there fighting ablity they took some back to Rome, this was a Mastiff type dog.