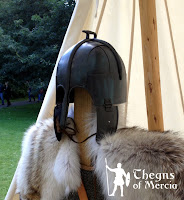 In March 1997, an Anglo-Saxon helmet was unearthed by archaeologists in a gravel-quarry at Wollaston in Eastern Northamptonshire. This was very exciting, as only three other helmets from this period were known to exist; the kingly Sutton-Hoo helm, the Coppergate helm from York and the Benty-Grange helm from Derbyshire. Immediately on hearing the news we visited Leicester Museum, where a temporary exhibition had been put on. There I found myself rubbing shoulders with a number of experts on early English battle-gear and took copious notes, planning a reconstruction as soon as possible.

Compared to the splendour of the reconstructed Sutton-Hoo helm or the virtually intact magnificence of the ‘Coppergate’, the so-called ‘Pioneer Helm’ was underwhelming, being plain and functional. Only half had survived the plough; the back section and one side having been destroyed. Still, there was enough left to reconstruct and over the next few weeks, a replica of sorts was produced. It has to be said that I disliked the thing from the beginning and have never taken it out of the dark recesses of its cabinet.
Recently, however, we acquired another replica, this time made by Tim Noyes of Heron Armoury (heronarmoury.co.uk). His version is, to my eyes, much more aesthetically pleasing and while it will never be as beautiful as its kingly contemporaries, is worthy of respect as a functional piece of armour. It is thus worth while examining what was probably the most common type of iron helmet in Early Anglo-Saxon England.

The Excavation
The burial site was situated on slightly higher ground adjacent to the Nene flood plain and close (250m) to a small group of Bronze-Age barrows. It was also very near the intersection of two Roman roads. As the flood-plain here is very flat, a burial mound (beorg) by the roadside would have been quite obvious. Unfortunately, no evidence of an actual mound or its quarry ditch survived.

The grave revealed the remains of a slightly-built young man in his middle twenties. The skeletal remains, which included teeth, a 15cm fragment of leg bone and a skull fragment, revealed no clues as to the cause of his death. The burial was dated to the late 7th century CE from the grave goods. In addition to the helmet, these included three iron buckles, an iron eating-knife, two copper-alloy clothing hooks, a bronze hanging-bowl (decorated with an inlaid Millefiori escutcheon- and possibly incomplete when deposited), a mysterious assortment of short iron-rods and tubes and a pattern-welded sword-blade.

This sword had obviously been an expensive weapon, as it featured a a central section of four separated bundles which had been alternately twisted in an interrupted twist pattern comparable in complexity to the blade from the kingly Sutton-Hoo Mound-1 burial. There was no sign in the grave of any metal hilt fittings, which might have been stripped from the sword prior to deposition for re-use or recycling. It is unlikely that such an expensive blade would not have had gold hilt-plates (scennas) and a gold pommel-cap (cnæpp). While blades with totally organic (horn, bone and wood) hilts must have existed, the discovery of near to a hundred pommel-caps in the Staffordshire Hoard, suggests that rich, decorative sword fittings may have been the norm rather than the exception, particularly for the most impressive of blades. Traces of a leather-covered wooden sword-sheath, lined with fleece were also found. Traces of feathers and imprint of textiles in the corrosion-products on the helmet, suggest that the Wollaston Warrior may have been lain to rest on a feather-mattress.

The absence of warrior-gear such as a spearhead or shield-boss is slightly unusual. This might be a reflection of the shallowness of the grave, with these items having been lost to the plough or, like the missing hilt-fittings, may never been placed in the grave in the first place. We know so little about the Anglo-Saxon grave ritual in reality - perhaps a sword and helmet were enough to mark the young man as worthy to join Woden’s Chosen in Wælheall?
What is obvious, is that the owner of the helm was of the thegnly or æðeling class. From the blow-fly pupae cases preserved in the corrosion-products on the inside of the helmet, it is clear that he did not die in winter and that there had been some delay between his death and burial. Maybe he had  died on campaign and his body taken home by his companions.

The Helmet
The most remarkable discovery found in this grave was, of course, the helmet. This had been placed by his right hip, maybe placed on a cushion. It had been hit several times by the plough, which had removed part of its right side.


During the initial excavation, it was not clear if this was a helmet or not. With fragmentary and degraded ferrous-metal items, it is all too easy to label the precious remains of an Anglo-Saxon helmet as an iron cooking pot, or worse still vice-versa! One can imagine the academic opprobrium of announcing to the world a new Anglo-Saxon Helmet for it to turn out to be a pot. Needless to say, archaeologists are therefore necessarily cautious, as seen with the 'recent' discovery of the Shorwell Helm.

Wisely, the excavators decided to encase the whole soil-block containing the iron fragments in plaster-of-Paris bandages and took it back to Leicester Museum. It was subjected to C.T. scanning, which revealed the details of the helmet’s construction including the distinctive boar-crest or swín-líc. The pieces were freed from the soil block and carefully fitted together to form a high rounded dome. The nasal bar had been bent inwards at the time of the burial to make it unusable. This so-called ‘ritual killing’ of war-gear seems to have been common practice among folk in the Germanic Iron Age, as evidenced by the deliberate and systematic destruction of weapons and equipment found at sites such as Illerup Ådal in Denmark. Sacrificing valuable war-equipment was thought to please the gods. More cynically, it also ensured that the item remained in the grave with the dead warrior, rather than being secretly ‘liberated’ later on by a needy relative or unscrupulous grave-robber.

Helmet Construction
The helmet-cap was constructed from an iron brow-band, a nose-to-nape band and a lateral band. The gaps between were in-filled by iron plates beaten to shape and held together by soft iron rivets. This construction is very similar to that found in the ‘Coppergate helm’ from York, but more basic. The Pioneer/Wollaston Helm showed no decoration on the cap except for three faint parallel incised lines running down the edges of the bands. As the brow-bands are quite deep, the helm sits quite low, so, in front the brow-band and the crest-band are cut away to form eye-holes. As with the Coppergate Helm, the nose-to-nape band extends downwards to form a long nasal-guard. The edges of the eye-holes are edged with U-shaped iron strips which extend around the nasal (similar edgings on the Coppergate are of brass).

The skull of the helmet is strengthened by simple hollow D-section ribs running along the middle of the ear-to-ear band and the nose-to-nape band. This crest extends almost to the tip of the nasal, strengthening what would otherwise be a weak point, as the nasal is considerably thinner than that found on the Coppergate Helm. A similar crest is seen on the Norse Gjermundbu Helm.

The helmet was fitted with good-sized cheek-pieces (hleorberga) attached by simple but functional loop-hinges. As might be expected, there was a rivet placed in the middle of each cheek-piece for the attachment of straps, which would been buckled under the chin. Initial X-rays suggested a neck guard composed of iron strips but this theory was disproved during excavation in the conservation laboratory. These mysterious strips of iron are now considered to have been part of a belt rather than part of the helmet.
A faint brown mineralised fibrous deposit was preserved in the ferrous corrosion in the interior of the helmet. This probably was what remained of the leather helmet lining.


The helm was topped by a simple little iron boar. Boar-crests are mentioned in Beowulf, the best example being the impressive ‘swine-likeness’ (swinlic) decorating the Benty-Grange helm (see ‘The Boar’ for further discussion).

Both the ‘Pioneer’ and 'Coppergate' helms resemble the helmets depicted worn by Northumbrian warriors on one of the Pictish Aberlemno Sculptured Stones. This is believed to depict the Battle of Dun Nechtain of 685 CE where king Ecgfriþ was heavily defeated by the Picts. On this evidence one might reasonably speculate that this helmet-type was the 'standard' Anglian design. Only time and the discovery of further examples will determine if this hypothesis is correct. 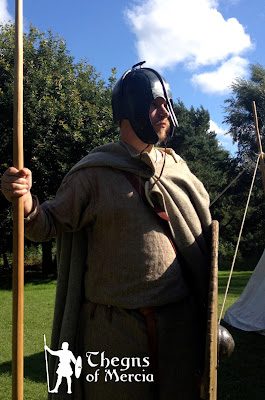 The helmet is often called the ‘Pioneer Helm’ in thanks for the generosity of the Pioneer Aggregates who funded the excavation and conservation work. It was initially understood that the finds would remain on show in Leicester Museum but not long after they disappeared into bowels of the ‘Royal Armouries, Leeds’, officially on long-term loan from the British Museum.

It is the opinion of the author that the Royal Armouries in Leeds, with its collection of late medieval arms and armour previously on display at the Tower of London is far from the ideal placement for the Wollaston Helm, which arguably would be much better displayed in its proper context among contemporaneous finds, perhaps back in Leicester, or in a local museum back home.
Posted by Dr Andrew Thompson on Sunday, September 01, 2013