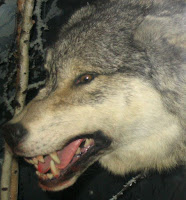 According to Norse Mythology, Óðinn All-föðr had two wolf-companions called Geri and Freki. As with his two ravens, the wolves indicate the God’s role as patron of Death and Battles. Conversely, according to the Eddas, Óðinn will, at Ragnarøkkr, be swallowed by the great wolf Fenrir, who had ages before bitten off the right hand of the war-god Tyr. Prior to this Fenrir’s two offspring, Sköll and Hati will devour the the Sun and the Moon, plunging the world into darkness.
The Nordic folk would have been well acquainted with the wolf and it is thus no surprise that it is so integral to their mythology.

The Old English word wulf and the Old Norse úlfr derives from Proto-Germanic *wulfaz, from Proto-Indo-European *wlqwos / lukwos. It is thought that in Northern Europe, a process of taboo deformation ritually replaced the original word *wlkwos derived from *wark - to tear.
The word wulf / úlfr refers to male wolf. Both Englisc and Old Norse have a separate word for a she-wolf: wylf and ylgr respectively.
In both languages, wolf has the additional meaning indicating wildness. Hence a wulfeshéafod (wolf’s head) is an outlaw and wulfhéafodtréo is the gallows.
Both languages have another word for wolf. It is used particularly but not exclusively of Fenris and his brood. This is warg in Mercian, vargr in Old Norse, and wearg in Old (West Saxon) English; a word used almost exclusively to mean 'criminal or accursed'. This derives from Proto-Germanic *wargaz (meaning ‘strangler’) from the Proto-Indo-European root wargh- to choke, worry or strangle. It is as a result of this etymology that the evil wolf-creatures in J.R.R.Tolkien’s books are called ‘wargs’.
Old Norse thus has varg-hamr- ‘wolfskin’, varg-stakhr- wolfskin cloak, varg-úlfr- werewolf and varg-ynja- she-werewolf. The Old English equivalent is werwulf, from wer (man) + wulf.
The Wolf (Canis lupus) is probably the most widely distributed mammal, other than man, although its numbers have been very reduced in Western Europe and exterminated in Britain. It appears to need wilderness areas to survive and cannot co-exist with man, unlike the North American coyote.
It was the ancestor of the domestic dog (Canis lupus familiaris) which was domesticated at least 15,000 years ago (and probably much earlier).
Wolves loom large in the folklore and mythology of the European Folk but are regarded with considerable ambivalence.
On one hand wolves were feared and hated; they came to personify all that was to be feared in the wild but, more practically, they had to be kept from preying on vulnerable domestic stock. On the other hand, the wolf was esteemed for its ferocity and courage and men sought to emulate these characters. Hence certain elite Norse warriors wore the skin of their totem and became known as Úlfhéðnar or “Wolf-Coats”.
‘Wulf’ is one of the most common elements in Anglo-Saxon names, hence : Æþelwulf, Cynewulf, Ealdwulf, Wulfnoþ, Wulfgar, Wulfhere, Wulfhelm, Wulfstan and, of course, Beowulf.
The semi-mythical founder of the East Anglian royal family was said to be Wuffa, whose name means ‘Little Wolf’. He would have ruled around 575 CE. His tribe was thus called the Wuffingas or ‘Wolf-Folk’. In the 7th Century CE, a king (probably Rædwald) was buried in a ship inside an earth mound at a place called Sutton-Hoo. Among the fabulous treasure of gold and garnet was a purse-lid showing a human figure confronting two wolves. On the negative side, in ‘Deor’s Lament’ the evil king of the Goths, Ermanaric is said to have had ‘wylfenne geðohtas’. This translates as ‘wolfish thoughts’. In the poem ‘The Battle of Maldon’, the invading Danes are graphically described as ‘wælwulfas’ - ‘slaughter-wolves’. Even more negatively, there is a general Germanic tendency to liken a man driven to live outside society, an outlaw (útlaga), as a wolf or wulfesheafod (wolf’s-head).
Werwulf is a rare Old English word but lycanthropy is described from ancient times, where a human-being would seem to transform into a beast. Clinical Lycanthropy is a rare but all too real psychiatric condition that I have encountered once in my time as a medical doctor. During attacks of madness, the afflicted person has the delusion they are changing or have changed into the form of a wolf.
Prior to effective drugs, such folk would go on all fours, eat raw meat and howl at the moon, and even as late as the 1980’s it was well known in psychiatric hospitals that patients were much more unsettled at full moon.
Clinical Lycanthropy is mercifully rare but is associated with schizophrenia and schizo-affective disorders.
The wolf also features significantly in norse mythology;
Óðinn’s wolves are mentioned in Grimnismál :

Geri and Freki, tamed to war, he satiates
the glorious Father of Hosts
yet on wine alone, the weapon-wielding
Óðinn, ever lives.

Sköll is the wolf who pursues the shining god
to the protecting woods;
And the son of Hroðvitnir, Hati, chases
The burning bride of heaven.

These are the two wolves, scions of Fenrir, who eternally pursue the Moon and Sun. Sometimes, at a lunar eclipse, Sköll catches up with the Moon-Ship and savages it, so that men see the moon-disc turn as red as blood. At Ragnarök, the wolves will swallow both Moon and Sun. This myth would seem to be quite ancient; another attempt to understand the natural cycles of eclipses.
Vafþrúðnismál tells of the mightiest wolf of all:

The wolf will swallow the Father of Men,
Vidar will avenge this;
the terrible jaws of the beast he will tear apart. From other sources it is known that Fenrir was, with Jörmungandr and Hel, the offspring of Loki and Angrboða. Taken into Asgarðr by Óðinn as a puppy, the wolf grew hugely until only the fearless Týr dared feed him. Foreseeing trouble, the gods eventually managed to bind Fenrir with a dwarf-crafted magical chain but at the cost of Týr’s right hand, bitten off by the wolf. Völuspa tells how Óðinn learns that at Ragnarok, the Wolf will break free and, in the Last Battle, swallow him whole. He will be avenged by the silent god Víðarr, who will brace his reinforced boot against the monster’s lower jaw and, seizing the warg’s muzzle, rend him in twain. However, Voluspa says that Víðarr will avenge his father by stabbing ‘the Beast of Slaughter’ in the heart with his sword.
These seemingly conflicting accounts can, however, be reconciled by supposing that in order to reach the monster’s heart that Víðarr must thrust down through the wolf’s open mouth. It is my speculation that this killing of Fenrir by the sword is a late accretion to the myth. Almost certainly, in the original story, the Sky-God was recovered from the belly of the beast, for why else should his son slay it in such an unlikely way. This is another Solar-Cycle Story. We find the same symbology in the story of Red Riding Hood, where the Wood-Cutter cuts open theWolf’s belly with his axe in order to Free Little Red Riding Hood and her Grandmother.
Wolves would seem to have been numerous in the early medieval period in Britain. Skeletal remains suggest they may have grown as large as modern Arctic wolves. They were especially numerous in the less-populated areas of Wales and Northumbria.
However, an animal which was such a threat to livestock, to human life and which frequently dug up and ate human remains could not be long tolerated by the increasing human population. The wolf thus was gradually exterminated by a combination of habitat loss from deforestation and by aggressive bounty-hunting. The English wolf was very rare by the late 15th Century. It hung on in Scotland until the 17th Century but was totally eliminated from the British Isles by about 1760.
From time to time proposals to reintroduce the wolf to wilderness areas of Scotland are made but are rapidly drowned by howls of protest from farmers. In such a heavily populated island there seems no place for the wolf.
Even Óðinn All-föðr could not tame the wolf. Fenrir was nurtured by the Gods but grew up to destroy them. Wolves are genetically programmed to attempt to progress up the pack hierarchy, even if this means turning on their sire and killing him. Wolves thus make dangerous pets, even if one is a god!
Posted by Dr Andrew Thompson on Wednesday, April 04, 2012