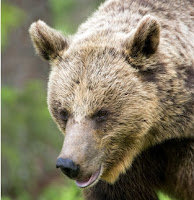 The Germanic Folk respected the bear for its strength, ferocity and endurance. Viking Berserkers wore bear-skins to better emulate their totem. It is difficult for modern folk to square this with our ancestor’s addiction to the horrific blood-sport that was bear-baiting. As bears had long since become extinct in Britain, during the Middle Ages, bears were imported from Europe and bred in captivity for this bloody purpose. In trying to understand the world of our ancestors, we must not shrink away these realities. The Bear is certainly worthy of study.

The Brown Bear (Ursus arctos) is the most widespread member of the bear family and is found throughout Europe and Asia. The European brown bear is generally quite small (compared to its North American counterpart) weighing between 100-265lb (45-120kg) and is omnivorous, feeding on a wide range of plants, small animals and carrion. Over millennia, bears appear to have learned to keep well away from human beings and are not dangerous unless provoked. Bears have no natural predators save man, who have always hunted the bear for its meat, its skin and for bravado. Upright, the brown bear can reach a height of 5-10 feet (1.5 -3 m.) It has a powerful bone structure, very powerful musculature and large paws, which are equipped with claws, which can be up to 4 inches in length. Despite their ponderous bulk, they can sprint up to 35 mph. The brown bear’s front paws are digitigrade; it walks on its heavily-clawed fingers. Its back paws are plantigrade, most of its weight being taken by the entire sole of the foot, like a human being. This enables a bear to stand erect on its stout back legs for some time and even walk upright for a short distance. This characteristic has engendered considerable anthropomorphism.

The Brown Bear is thought to have become extinct in Denmark as early as 3,000 BCE. It become extinct in the British Isles probable around 500 BCE, although a few may have lingered in wilderness areas as late as 1,000 CE. Bears survived in the wilder parts of Germany as late as the early 19th C. They exist in small numbers in Norway and in larger numbers in Sweden, where they are slowly increasing in numbers, thanks to wise conservation policies.
It is not known if there were captive bears in early Anglo-Saxon times but there is good evidence that they were being imported and captive-bred in the Late Anglo-Saxon Period and on into near modern times. The regrettable so-called sport of Bear-baiting seems to have been very popular. The bear was usually tied to a stake by a chain or put into a pit, while a pack of vicious dogs attacked the poor beast. It should not surprise us that this sadistic activity was introduced by the Romans. In the Roman arena, bears were used as performers, where they would be ‘encouraged’ to ‘dance’, as executioners for criminals, as well as in the "sport" of Bear baiting.
Would it have been so if our ancestors had remained pagans; more in touch with nature? Certainly the Christian Church taught that nature and animals in general existed only to be exploited by man; that they were without ‘souls’ and consequently of little worth. In contrast, the pagan believed that all creatures had a spirit and that all animals were, to some degree, brothers.
There are stories of bear-cubs being kept as pets by Norsemen. Brown bears often domesticated and were even imported into Iceland as pets where they were known as "house bears." Apparently the importation of brown bears into Iceland was later stopped because they became such a nuisance. Owners of bears were liable to large financial penalties their pets injured people or damaged property.
The Old English name for bears was bera, derived from Proto-Germanic *berô. This literally means “the brown(one)” and is derived from the Proto-Indo-European *bheros "dark animal" and *bher- meaning brown / shining. The related Old Norse word was björn and the Old High German equivalent was bero. 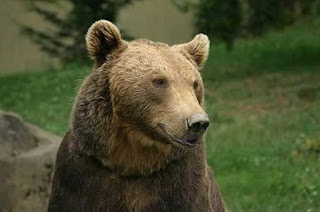 It is interesting to note that the original Proto-Indo-European word for the bear, *rtko was ritually replaced in Northern Europe because of Hunter’s Taboo on names of wild animals. In the Mediterranean area, the original term persisted, hence the Greek aρκτος (arktos) and Latin ursus. (*rtko is related to the Sanskrit word rakshas, meaning ‘harm, injury’.)

The Hunter’s Taboo is fascinating, for words hold power. What we call a thing influences the way we think of a thing. Thus it is believed that in Northern Europe, Bronze-Age hunters came to believe that using the bear's true name allowed the animal to hear and comprehend the hunter. This would allow the bear to either elude the hunt or come seeking him, who would then become the hunted. The bear was the only really dangerous animal in the great Germanic forest, so to reduce this danger, men changed the rules. The original name of the bear, probably meaning “dangerous” or “destroyer” was replaced by a euphemism. To the Bronze Age hunter a 20 stone brown bear was certainly a force of destruction. Calling it ‘the brown one’ / “Bruin” magically dis-empowered it : the ‘Destroyer’ became a ‘Teddy-Bear’! So was the original word lost.

In the Slavic lands, a similar taboo deformation resulted in the Russian name медведь (from *medu-ed) meaning ‘honey-eater’. This compares with our familiar Beowulf which literally means ‘Bee-wolf’ - an obvious poetic euphemism for Bear, in light of the bears notorious liking for honey. Beowulf is ‘bear-like’ in his great strength.

In Scandinavia the word for bear is björn (or bjørn), and was (and is) a common masculine name. The use of this name is ancient and has been found on several runestones.

In Germanic culture, the bear was a symbol of the warrior, as evident from the Old English term beorn which can take the meaning of both "bear" and "warrior".
Hence we find the Old English name Beornheard - “Bold as a Bear” and its Old High German equivalent, Bernhard. Also Old High German Beringar - “Bear-Spear”, Old Norse Ásbjörn - “Divine Bear” and Þorbjörn - “Þórr’s Bear”. 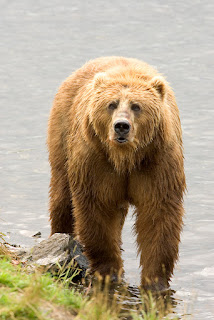 Bear folklore is widespread, especially in the far northern hemisphere. It is not surprising that this awesome beast was one of the first animals to be revered by our distant ancestors. From as far back as the Palaeolithic (around 50,000 years ago) there is evidence of a bear cult and the bear appears to have played a central role in many shamanic practices of the north.
In Finnish Mythology, of all the animals, the most sacred was the bear, whose real name was never uttered out loud. The bear ("karhu" in Finnish) was seen as the embodiment of the forefathers, and for this reason it was called by many euphemisms: "mesikämmen" ("mead-paw"), "otso" ("wide brow"), "kontio" ("dweller of the land"), "lakkapoika" ("cloudberry boy").
The Finns believed that the bear the ability to reincarnate. After a successful bear hunt, a celebration called karhunpeijaiset ( "celebration of the bear") was arranged in honour of the slain bear. This was to placate the bear’s spirit and to convince it that it was greatly respected by the people so that the bear would want to reincarnate back into the forest. After the bear's meat was eaten, the bones were buried respectfully. The skull, which was believed to contain the bear's soul, was placed high upon the branches of an old pine tree. This tree, kallohonka (skull pine), was probably a symbol of the world tree and the ceremony was meant to deliver the bear's soul back to the heavens, from where it had originated. From the heavens, the bear would come back and reincarnate to walk the earth.
What is fascinating is that none of the ancient Germanic Gods have the bear as their symbol. It thus may be surmised that the animal was sufficiently rare during the warm European Bronze Age that it did not form part of the mythological mind-set, unlike the raven, wolf, boar, hart and horse. The bear, though, retains a strong grip on the Germanic soul : no other cuddly toy is as much loved by children and adults as the (Teddy) Bear.

pagans drove bears to extinction in many areas. Romans practiced bear baiting. The idea that pagans wouldn't have is whimsical. They did not see animals as their equals at all