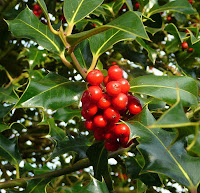 Yule is the Modern English version of the mid-winter festival celebrated by the Northern European folk. It was later subsumed into the Christian Christmas, although it can be cogently argued that it was the other way round. The Northumbrian monk Bede (673-735), in his treatise ‘The Reckoning of Time’ refers to the months corresponding to the Roman December and January as (Ærra Géola (Before Yule) and Æftera Géola (After Yule). He thus implies that Géola, Yule, was the name for the winter solstice.

The pagan mid-winter feast has been linked with the god Wóden and his Wild Hunt, as well as with the fertility god Fréa Ing and the Thunder God Þunor.
Terms with an etymological equivalent to Yule are used in the Nordic countries for the Christmas season. Since the 18th century, Yule is also used to some extent in English-speaking countries to refer to Christmas.

Etymology
Yule is the modern English evolution of the Anglian Old English words géol or géohol and géola or géoli, with the former indicating the 12-day festival of "Yule" (later: "Crístesmæsse") and the latter indicating the month of "Yule". Both words are thought to be derived from Common Germanic *jehwlan, and are cognate to Gothic (fruma) jiuleis and Old Norse jól, (Danish and Swedish jul and Norwegian jul or jol).
The origins of the word remain controversial. Attempts have been made to link it with ‘wheel’ (by way of the Old Norse hjól) but are linguistically flawed. The most likely but rather unsatisfying etymology is that ‘yule’ merely means ‘a time of revelry’. This is related to gylian / giellan - to yell, shout. The uncommon Old English word gýlan, actually means ‘to make merry, keep festival’.

The Pagan Mid-Winter Festival
Yule was the midwinter festival celebrated by the Germanic peoples. It would seem to have been quite distinct from the ancient Roman festival of Saturnalia, which was held towards the end of December at around the time of the Winter Solstice. Saturnalia involved gift-giving, partying and a reversal of the social order, so that masters waited upon their slaves at table. Saturnalia continued to be popular into the 4th century C.E. The New Year was celebrated in the later Roman Empire as the Dies Natalis of Sol Invictus, the "Birthday of the Unconquerable Sun," on December 25. With the advent of Christianity, some of these customs were absorbed into the seasonal celebrations surrounding Christmas and the New Year. At that time, under the Julian calendar, December 25th was also the winter solstice. Now, of course, the solstice falls on the 21st or 22nd of December.

The events of the Anglo-Saxon Yule are generally held to have centred around Midwinter. Feasting, drinking and sacrifice were involved, as well as the swearing of oaths. Numerous age-old customs, some probably dating back as far as the Bronze-Age, were important and still feature in the Christmas festivities to this day. The three main gods; Woden, Þunor and Ing seem to have been strongly associated with Yuletide. It is likely that the Early English Yule feast was still a time for the cult of the honoured ancestral dead. Yule has been associated with the ancient belief of the ‘Wild Hunt’ - a ghostly group of riders and hounds in a mad pursuit through the winter sky, led by Woden himself. In a very real way, the pagan Anglo-Saxons would have felt their honoured dead would be present at the Yule feast with them, just like their distant Stone-Age or Bronze-age ancestors, who might have brought the skulls of their ancestors from their tombs for just this purpose. Thus, at the Yule feat it was customary for an extra place to be laid at the table. At Yule the spirits of the ancestors were thought to be permitted to return to the land of the living. As such they were welcomed back into the home to visit their kin and partake of the food and drink. 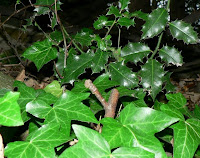 The Yule Log (géolstocc)
As part of the symbolic magic of Yuletide, a special oak or ash tree was selected, cut down and hauled into the hall by a group of men with great ceremony. This Yule Log was to provide warmth throughout the 12 days of Yule. As one end burned away, the remainder was moved into the fire. The fire was always started with a remnant from the log that had been burned in the previous year's festivities.

Holly and Ivy (holen and ifig)
The Early English decorated their dwellings with evergreens at Yuletide, a reminder that the Earth merely sleeps during the winter. Holly was important because it retains its greenery through the winter months and is thus a symbol of summer life during the sterility of winter. The red berries had an apotropaic function. Prickly Holly was the male symbol of this greenery whereas Ivy was the feminine, the two often placed together as a symbol of fecundity at the dark end of the year. 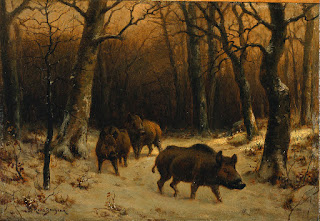 Misteltoe (mistiltán)
This magical protective evergreen plant was hung above doorways. The origin of the custom of kissing under the mistletoe is obscure.

The Yule Boar
Roast Wild Boar had been the most prestigious meat for the feast since the Bronze Age. Among the Anglo-Saxons the boar was sacrificed (and then eaten) in honour of Frea Ingwi (to whom the Boar was sacred) as part of the celebration of Yule in Germanic paganism. (This corresponded to Freyr among the Norse, where the animal was termed the the sonargöltr or sónargöltr) Prior to being sacrificed, all would lay hands on bristles of the boar and swear solemn vows, a tradition known as heitstrenging among the Norse.
The serving of a boar's head at modern banquets and particularly at Queen's College, Oxford may also be a reminiscence of the Yule boar-blót.

Toasts
No Anglo-Saxon solemn feast would be complete without the drinking of toasts and the swearing of oaths. A toast is a ritual in which alcoholic drink is taken to express honour or goodwill to person mentioned in the verbal accompaniment of the act. The drinking of toasts may have developed from the earlier custom of 'libation', where the alcoholic drink was poured onto the ground as an offering to the gods. The canny North-European instead poured the strong drink down his throat. It must be remembered that ale was seen as the gift of the fertility god Frea Ing and that the Anglo-Saxon word for ale; ‘ealu’ in Old West Saxon and ‘alu’ in Mercian, are cognate with the early Germanic charm word alu, composed of the runes Ansuz, Laguz, and Uruz. This probably means ‘God-Water-Strength’, which is self-evident. The word ‘ale’ is also very similar to ‘hale’ and thus the Anglo-Saxon greeting / toast “Wes þu hál !”, meaning “Be well !”

The Old Norse word for a toast was ‘full’, indicating that the horn or beaker was full before the drinking of the toast and (presumably) empty at the end of it. This word relates to the Old English ‘ful’, meaning a cup or beaker. At the Yule feast, the first toast to be drunk was the Óðinsfull; to Óðinn, “for victory”, the second was to the gods Njörðr and Freyr "for good harvests and for peace"
It was also customary for anyone who felt it needful, to call out ‘Bragi’s full’ and before drinking , make a solemn vow in front of his peers, to accomplish a particular deed during the following year. This practice bears similarities to, and may be the origin of modern "New Years Resolutions". The last formal toast, called the minni (meaning remembrance) was then called. All would then empty their horns in memory of fallen comrades and deceased family members.
It is very likely that the pagan English had a similar ceremony, drinking to their ancestor-god Wóden for sige, to Eorþen Modor and Fréa Ing for gódes hærfestes and frið and for mynegung.

Mothers Night
According to Bede, the new year began on Módraniht , “Mothers' Night”, the evening of the 25th of December. Many believe that the Anglo- Saxons honoured the Ídisi, female protective spirits, on this night. Bede is very reticent about the all night activities of Módraniht and it may well be that activities celebrating fertility occurred.

"Æftera Geola..."
Æftera Geola, meaning ‘After Yule’ roughly corresponds with modern January. The first day of Æftera Geola was midwinter day, which was also new year day (but is now the 25th December). Midwinter day began at the fourth sunrise after the winter solstice. Yule began from sunrise and brought an end to the old year and a beginning to the first day of the new year. There followed twelve days of celebration of the passing of midwinter and the return of the sun and the renewal of life. This holiday lasted until the twelfth night of Æftera Geola (now 6th January). Hence the Yule and New Year celebrations were once one and the same.

It is amusing to note the perennial moans from the religious establishment that the ‘true meaning of Christmas has been lost’. In fact, if the original Yuletide involved little more than getting together with friends and family and eating and drinking perhaps a bit more than usual in an effort to deny the winter miseries, perhaps we in 21st century England are closer to its true meaning than our god-fearing ancestors.
Posted by Dr Andrew Thompson on Tuesday, December 25, 2012